Unicornia is a location in the G3 franchise, notably in the G3 movies.

Not much is known about Unicornia, other than it's the home of only unicorn ponies and the Crystal Rainbow Castle. The area first appears in "The Runaway Rainbow" as not only the setting but the debut of the unicorns themselves. A piece of the area appears in the Gameboy Advanced version. In "Greetings from Unicornia", Rainbow Dash pays the area a visit and sends a post card to her friends back in Ponyville, highlighing her adventure. In "Come Back, Lily Lightly", Part of the area becomes highlighted due to Cheerilee and Rarity becoming separated from each other as they go to find Lily Lightly, whom went missing due to feeling awkward from her horn's glow when she giggled. Towards the end of "The World's Biggest Tea Party" live show, Crystal Rainbow Castle can be seen as it becomes the location for their tea party.

The entrance to Crystal Rainbow Castle in Unicornia in "The Runaway Rainbow" for GBA. 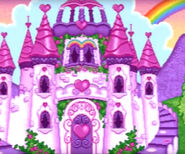 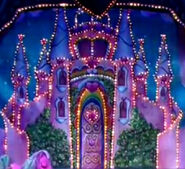