Rarity
The Runaway Rainbow is the sixth direct-to-DVD film released in 2006. The movie features Rarity as she struggles to make the first rainbow of the season.

The episode finally premiered on the Hub TV Network alongside The Princess Promenade and Twinkle Wish Adventure, on August 8, 2014 during its My Little Pony: Mega Mare-athon.

The ponies are preparing for the first rainbow of the season and are wrapping ribbons around lamp posts. Rainbow Dash loves this time of year as it's all about rainbows. One of the ribbons attached flies away where Whistle Wishes catches it and arrives at the Crystal Carriage. While there, she and others hear a squeak and find out it's from a mouse inside one of the carriage's wheels. The unicorns decide to wash the carriage and get in a bubble fight before they're requested inside by Cheerilee. Rarity had a job to do so being late wasn't her fault and reveals that there were 63 ribbons out of 65. To sort things out, Whistle Wishes and Brights Brightly race off while Rarity is asked to stay behind and learn how to be a princess.

As the lesson begins, Rarity is listening until a rainbow-colored worm grabs her attention. Cheerilee resumes the lesson and won't stop because Rarity's hungry. In fact, Cheerilee brings up the shooting stars that apply to the two of them, Whistle Wishes and Brights Brightly. By the time Cheerile is finished explaining and ready for Rarity to repeat it all back, Rarity is elsewhere. Meanwhile, The Breezies are out and about, waiting for the others and Zipzee finds the nearest flower to sniff, causing her to sneeze and fly backward. Back in Ponyville, as the ponies wait, Pinkie Pie asks about hearing another rainbow story from Rainbow Dash. Rainbow Dash agrees but doesn't know everything about rainbows as a song begins.

Rarity has found the magic wand and by the time Cheerilee Whistle Wishes and Brights Brightly have found her, they're too late to stop Rarity from making herself disappear. Rarity ends up in Breezie Blossom and the Breezies are too curious to ignore their new and much larger companion alone. As Brights Brightly's shooting star passes overhead, the Breezies take Rarity to Rainbow Dash, whom in turn offers Rarity a slice of the leftover cake. As everyone watches, Rarity devours the rest completely and wants more but Sweetberry is out of rainbowberries. Unfortunately, Rarity still hasn't made the first rainbow appear so at the moment there won't be any more rainbow treats.

Regardless, Rarity finds roller skates on the floor and Minty asks if she's interested in trying them on but Pinkie Pie has a bad feeling about it and protests otherwise. Sure enough, Rarity rolls around the room chaotically, leaving everyone to spread out to avoid injury. Rarity ends up outside and loses one skate. As Rarity gets into a song, she loses another skate and progresses further away, prompting the others to run to her rescue. By the time the song is over, Rarity's fun has ended and she ends up in the mud, splashing Rainbow Dash with it to her disgust. Rarity wants to go home but the ponies don't know the way so they turn to Spike.

Spike has just the book in mind and shows them the different castles, including Rarity's. Using the map, Spike and several others head out but Minty and Pinkie Pie end up in the rapidly moving water. The Breezies are enjoying honey but have forgotten about everyone else and race to find them. Once they do, they help bring Minty and Pinkie Pie back on dry land. That night, as the others sleep, Rarity and Cheerilee stay up for a duet that deals with their current situation. Making matters worse, colors are disappearing from Ponyville and ponies alike. Even Rainbow Dash is looking less like herself but Spike is out having fun scaring the unicorn ponies. Fortunately, Rarity comes along and is reunited with the other unicorns.

The four unicorns race into the Crystal Rainbow Castle where the rainbow is supposed to be made. However, their first attempt fails and Rarity admits that the entire situation is her fault and not anyone else's. The unicorns try again to successfully restore colors across Ponyville and on everyone that lost them. They're not done yet as Rarity has a ceremony to perform and they dress her up and get her to the balcony. The ponies celebrate with a song before Rarity announces her agreement to make a new rainbow daily, each more beautiful than the previous.

The movie was released on DVD in 2006. Additionally, a video game, book and comic based on the movie were also produced. The video game was released on Game Boy Advance and Windows XP. The storybook adaptation was created by Nora Pelizzari and was published by HarperFestival on August 15, 2006. The comic adaption was published by Tokyopop in 2006. There was also a stickerbook.

The DVD cover for the movie.

The Game Boy Advance adaptation of the movie. 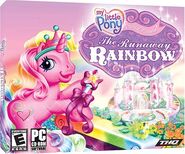 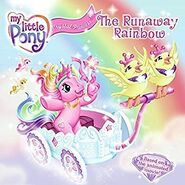 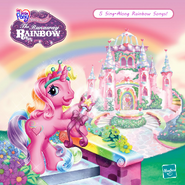