Snowflake is a tomboyish pony character from the G3 franchise.

All winter long you can be sure to find SNOWFLAKE in her favorite place, the skating pond! After she practices her fancy flips and jumps she gives lessons to the younger ponies so they can put on an ice show for their friends. - Snowflake's backcard story from the back of her toy's box.

Snowflake is sky blue with white, aquamarine and lilac hair. Her eyes are turquoise and her cutie mark is a white snowflake. Snowflake only makes a cameo appearance in A Charming Birthday. She is seen with Candy Cane watching hopscotch being played and has a much lighter body color than her depiction above. She is voiced by Maryke Hendrikse. 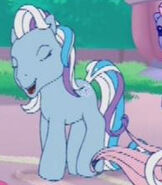 Snowflake in "A Charming Birthday". 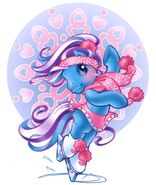 Snowflake as drawn by Lyn Fletcher. 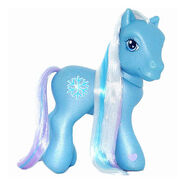 The figurine out of its packaging.
Add a photo to this gallery

Add a photo to this gallery
Retrieved from "https://mylittleponyg3.fandom.com/wiki/Snowflake?oldid=16852"
Community content is available under CC-BY-SA unless otherwise noted.