Glitter Glide is a minor character in the G3 movies and franchise.

GLITTER GLIDE loves to skate, especially when she spins 'round and 'round! She doesn't even mind when she gets dizzy -- which happens quite a lot! - Glitter Glide's backcard story from the back of her toy's box.

Glitter Glide is pink with white, pink, sky blue and emerald hair. Her eyes are indigo and her cutie mark is a pair of ice skates. She's first seen in A Very Minty Christmas exchanging gifts with Bowtie. Later, she's among the crowd of ponies listening to Pinkie Pie's speech and is generally among the crowd at other times in the movie. In The Princess Promenade, she's with Fiesta Flair helping to pull a heavy piece of their float into place and gets help from the Breezies. She's also seen when Wysteria introduces Spike. She is voiced by Nicole Bouma. 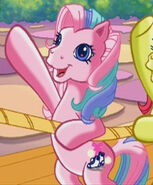 Glitter Glide in "The Princess Promenade".

Glitter Glide was released as a standalone ice skating pony or as a two pack with either Loop-De-La or another pony and has a unique feature of being joined as two halves, allowing her to be posed in more ways than regular pony figurines. 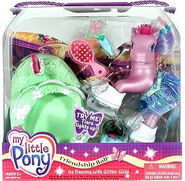 Glitter Glide released in a two-pack with Minty.
Community content is available under CC-BY-SA unless otherwise noted.
Advertisement