Flower Garland is a pony from the G3 franchise.

Flower Garland is purple with purple, light pink and white hair. Her eyes are dark green and her cutie mark is a garland made from two white flowers and their stems. She had no on-screen appearances. 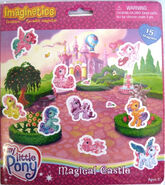 Flower Garland among other ponies for the Magical Castle magnetic playset.
Community content is available under CC-BY-SA unless otherwise noted.
Advertisement