My Little Pony G3 Wiki
Register
Don't have an account?
Sign In
Advertisement
in: Ponies, White Ponies, Characters,
and 9 more

Daffidazey is a white girly girl earth pony first seen in "The Princess Promenade" helping the others get Spike clean. She's also shown to be an expert hair stylist, though has trouble with Spike's.

Daffidazey is white with gold, tangerine, bright pink, violet and turquoise hair. her eyes are azure and her cutie mark is a tangerine, violet and green flower. She appears in "The Princess Promenade" after Pinkie Pie and Wysteria take a dirty Spike to see her for a bath. She accepts and ends up giving Spike a hairdo as well but it takes her a while to get Spike to cooperate. She also appears in 3D animation during the commercial of the Twist & Style Petal Parlor playset. She is voiced by Ellen Kennedy.

This 3D animated commercial is done in Alias Maya and Avid DS in October 20, 2006.

Daffidazy in 'The Princess Promenade".

Daffidazey doesn't give up easily but can go too far when it comes to hairdos, generally when working with beings that aren't ponies. She's also rather encouraging as she uses a song to help encourage Spike to take a bath and get clean. However, she can also be rather curious as evidenced in her song "Feeling Good".

Daffidazey was released with the Twist 'N Style Petal Parlor playset, which came with a Zipzee Breezie pony initially, then was re-released outside the US with a bonus Snippity Snap Breezie Pony. 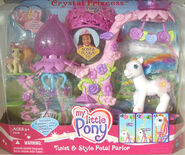