Backcard Stories are the stories about the pony whose merchandise is showcased on the front. They generally take up much of the toy's back end of the box and are generally used to help hold the box together. Each Backcard Story that had a pony generally featured stock artwork that re-used certain poses repeatedly but not necessarily back-to-back, often rotating through the different poes and applying a different pose for the next pony than the one previously used. They also feature typical G3 scenery or the scenery that fits with the pony it's depicting but not all ponies released actually have a story or even artwork featured and none of the playsets actually have Backcard Stories at all. Each backcard story also featured a To Do list, which had generally three items the pony was aiming to do. In some cases, the Backcard Story was accompanied by features of the toy that was included in the packaging. Some fans of the franchise actually collect these and figure they may be worth more in the future.

Early releases of ponies often featured more than one pony on the back with the story. However, in some international releases, up to 5 or more ponies would be included and also featured the names of each pony and their stories in different languages, each language identified by color. In 2006, Backcard Stories became much smaller, having only a few bulleted facts about the pony and a relatively small image of the pony with the pony's name on top. When the 25th anniversary of the franchise came around, the artwork was scaled up, taking up about 90% of the box's overall height. The scenery used to accompany the ponies was also replaced, at first becoming just a rainbow behind the pony in 2006 but changing completely to more generic shapes and colors  during the franchise's 25th anniversary. 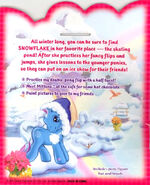 Sparkleworks' first Backcard Story. Note Rainbow Dash next to her. 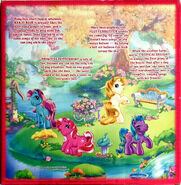 Four ponies on one Backcard Story, complete with their stories.

Minty's new Backcard Stroy. Note the complete redesign compared to her first one.